#02 Construction of the ‘Suzuka 8hours’machine

Can we build the machine in time?
Construction ‘Behind the Scenes’

So, where to start?
Before challenging the 8hours challenge, the team needs to compete in the Suzuka 300km road race. It’s set for June 13th… Only one month left!

Talking of building the race machine; the first priority is the gasoline tank for a content of exactly 24l as indicated by the race regulation. Time to contact ‘Beater’!

Nitta:“Nakahara-san. We are participating in the Suzuka 8hours race!”
Nakahara：“Well, that is very soon! You usually work a tight schedule, but this is sudden! What bike are you planning to use?”
Nitta：“S1000RR, we already registered for the 300km road race on June 13th.”
Nakahara：“Impossible! That is really not enough time! We need at least 3 months for this.”
Nitta：“I will bring the bike anyway ? next week.”
Nakahara：“…”

When you build parts for a bike, it is unquestionable: Without a bike at hand, you cannot build anything at all. I often get this demand: “Please build a carbon part from this sample.” Approaching the creation of a part in that fashion only generates problems. You need the original bike, need to set up the parts and check whether it fits. There is either that or the option of creating drawings based on reliable data. There is no third choice.

When you use a pre-existing FRP cowl part and create a mould for the carbon part thereof, it is well possible that it will not fit. Why not? FRP is light and strong and follows form to a certain degree. However if a prepreg carbon part protrudes even just a millimetre, the part will not interconnect nicely with its counterpart and it will be impossible to fit the cowl together. This is because carbon is so ‘light, hard and strong’! Excuse me using an example from another company, but there have been cases, where carbon fenders have even cut up tires. That is how strong carbon is.

Once I start elaborating on carbon I will easily need 20 pages, so let’s leave it at that for now. 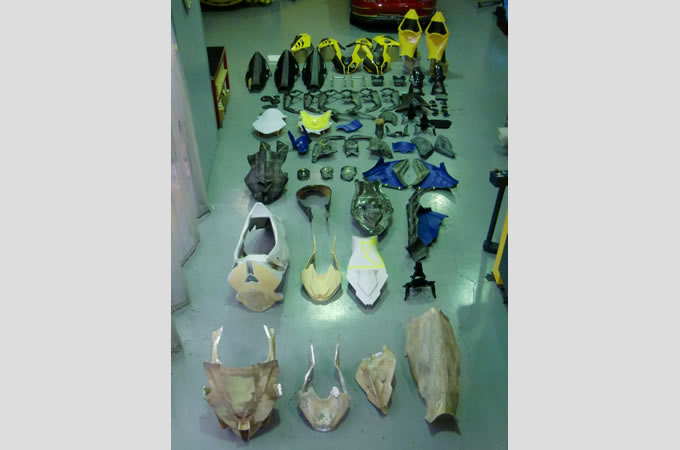 To create the cowling of two bikes all these models and moulds are necessary. Including all moulds, these are more than 60 parts! As all parts are manufactured by hand, of course normal working hours need to be extended. More and more members of the staff are feeling a lack of sleep.

I get on the S1000RR and ride to ‘Beater’, which is close to the Gotemba interchange. Nakahara-san is also a rider. In his free time he enjoys riding his Ducati 1098R. Even though he is at work, his ears are sensitive to the sound of a bike. He looks up.

Nakahara：“Wow! That bike looks even better than in the magazines! Get that engine roaring please!”

Nakahara：“And it sounds great too! It is somehow inspiring! That little 16,5l tank is really a pity on that bike. Shouldn’t we be selling this as a 24l version with a normal filler cap?”

Nitta： “Great idea! After we test it at Suzuka 8hours, ‘Beater’ should sell the 24l tank!”

Shokunin Nakahara had managed to build the 24l version of the S1000RR tank in triple speed, besides dealing with his daily business! Thanks to this aluminium tank-shokunin we raced the Suzuka 300km road race with a 24l tank! 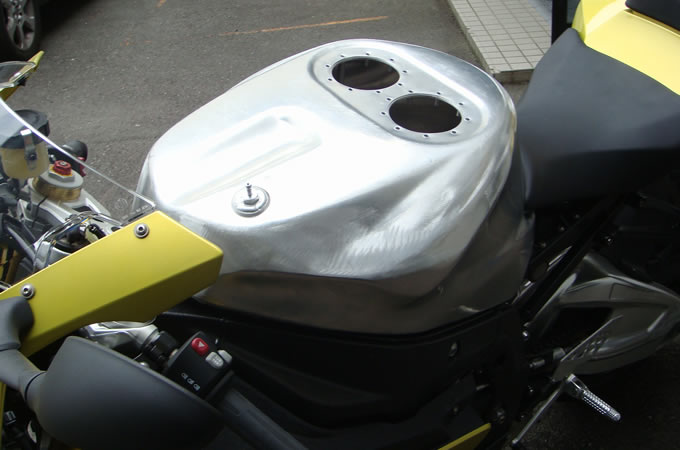 The brand new sparkling aluminium tank is fascinatingly extending its aura in its new place.

Here is where the problems start!
The bike is at ‘Beater’ for the fitting of the custom tank. At Tras all there is left are the FRP cowling parts. This is bad! At this rate there is a high probability of not being able to fit the parts, once the bike is back. Worst case: We cannot assemble it anymore. But there is no time to wait for the bike. We got to get started anyway.

At Tras, Nitta and the staff immerse themselves from dawn till dusk into the project, working overtime and giving up their weekends.

Nitta：“What!? Do you think you can manage all that in the little time available?”

What a miracle! Thanks to my forward looking staff we made it on time! The S1000RR Tras Special is ready for a test ride in Suzuka! 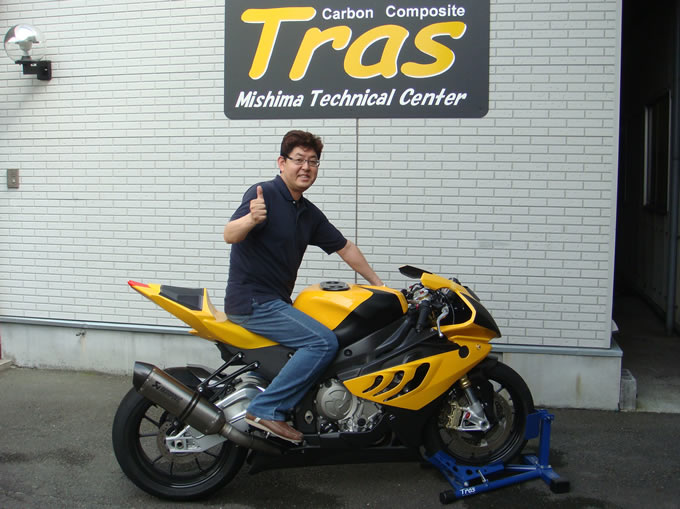 The cowling painted in Tras Yellow all fit together. The colouring is based on a famous sports car, so it’s a perfect fit! Under UV light is sparkles in wonderful pearl colours. 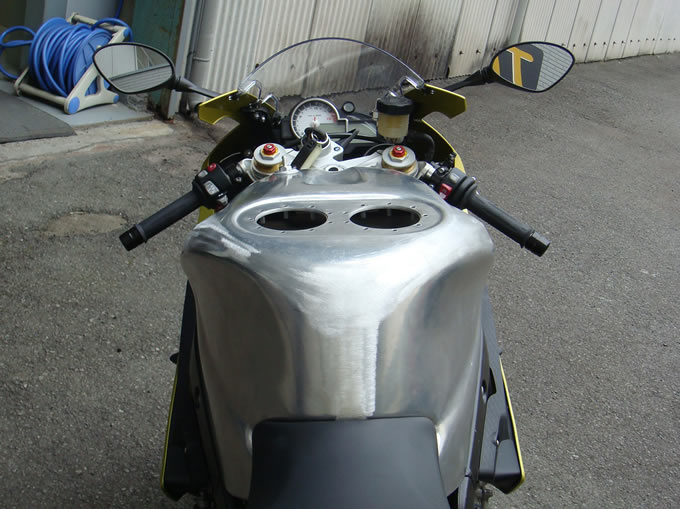 The tank looks big, but the riders positioning on the bike actually improves with this 24l tank. It is on sale at ‘Beater’. 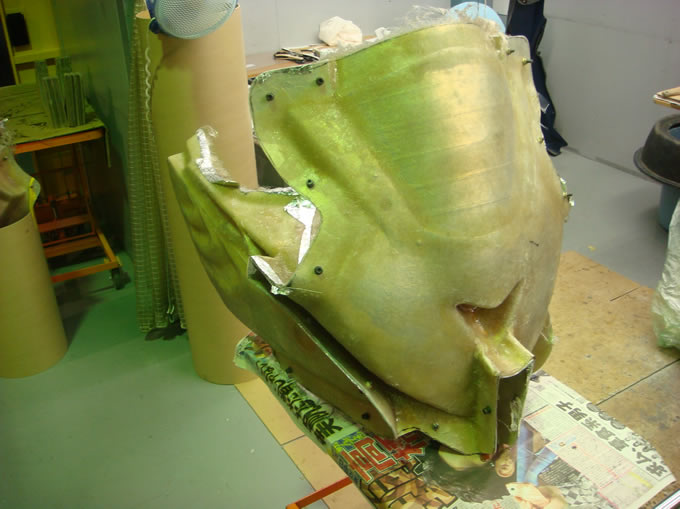 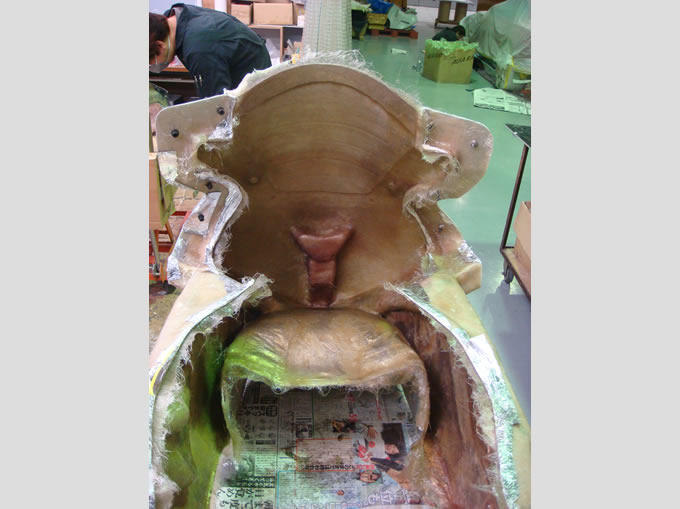 The abandoned front cowl. (As this is used as a mould for the master, it cannot be used to produce parts.) 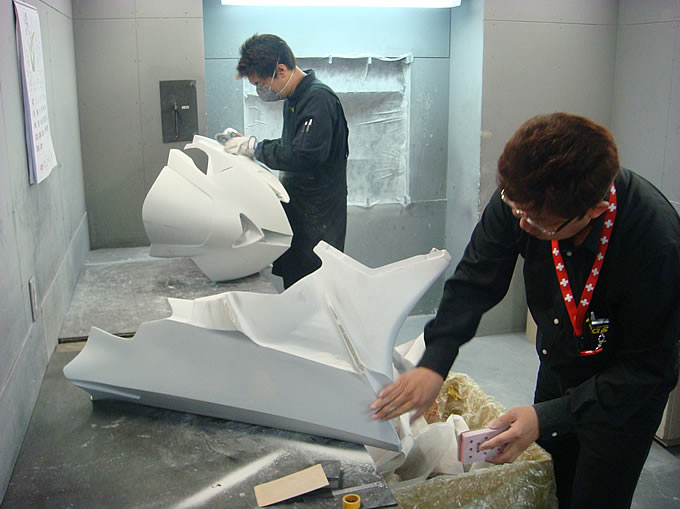 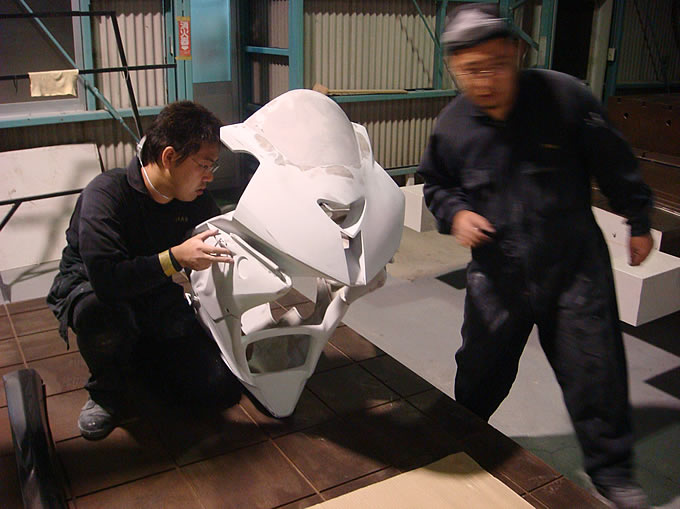 To create a carbon mould, we first go and produce a model. Detailed edges and sharp lines are perfected with putty and surfacer. Normally this would be done set on the machine, but as the machine is at ‘Beater’… 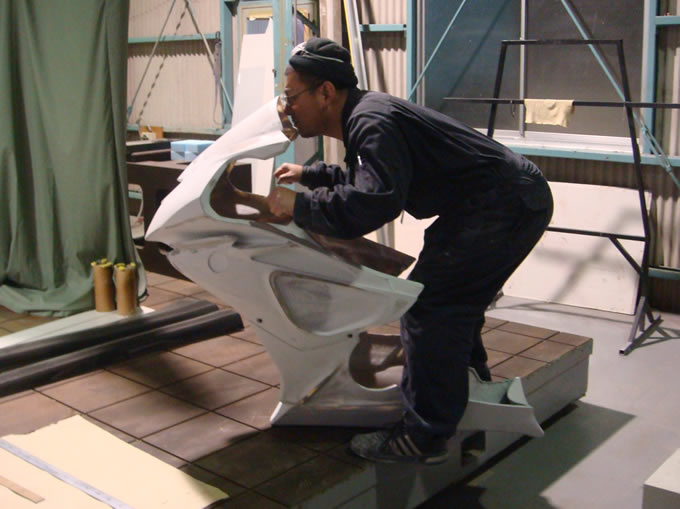 Apparently the overworked staff transformed into riders at nighttimes. 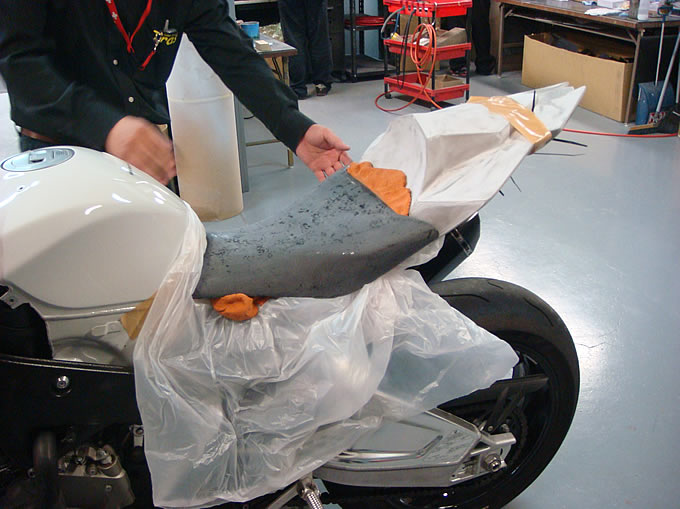 To determine the seat position a model based on rider Toda is created. 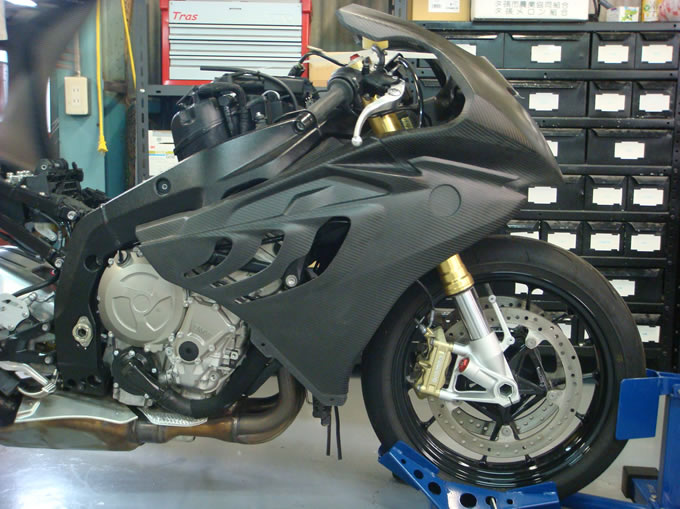 First the upper and center cowls are completed. The picture shows the fierceness of the carbon material!

The screen is Tras made too. Given a clear paint, the whole body is reviewed.

Two sets of parts. What an amount of bits and pieces!

The whole bike is done! Even the start numbers are painted on! 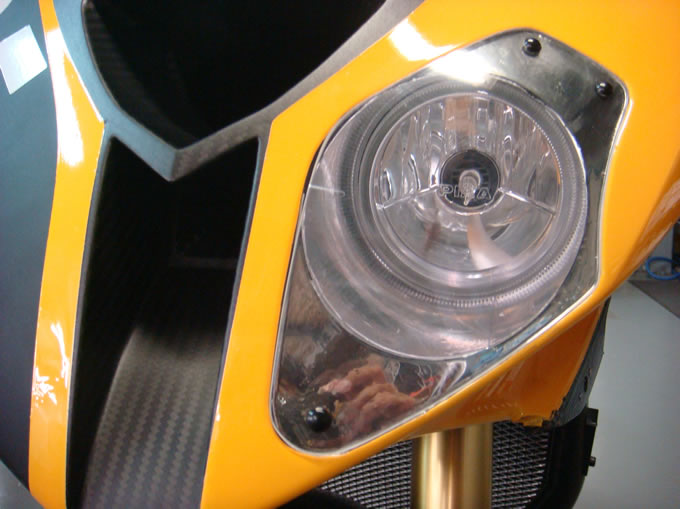 PIAAs HID light is essential for the Suzuka 8tai! 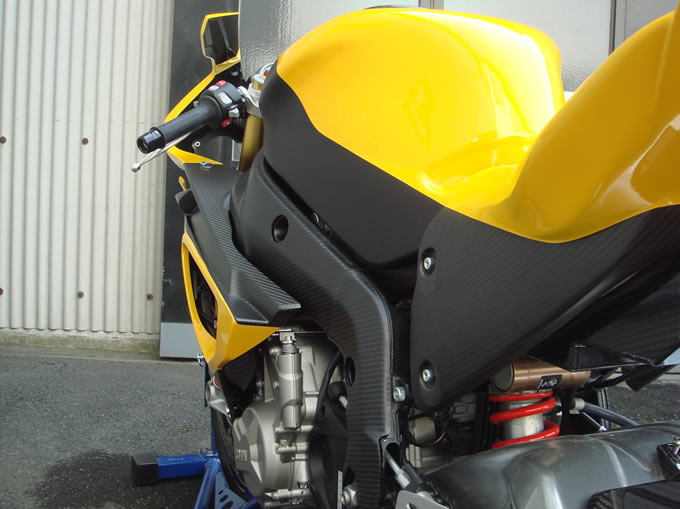 Nothing excels BMWs design. As I believe this, I based the design on the normal version.

The engine cover is attached with a special adhesive, taking advantage of the thermal conductivity of the material. 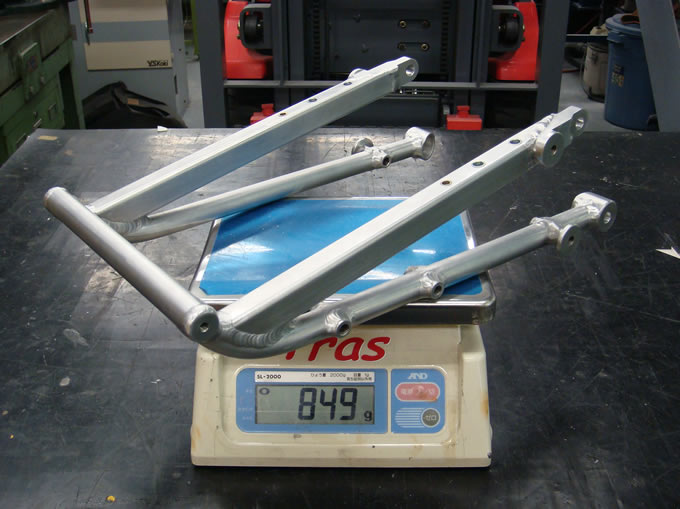 The seat rail has a weight of 850g. Using a carbon seat rail can reduce the weight. 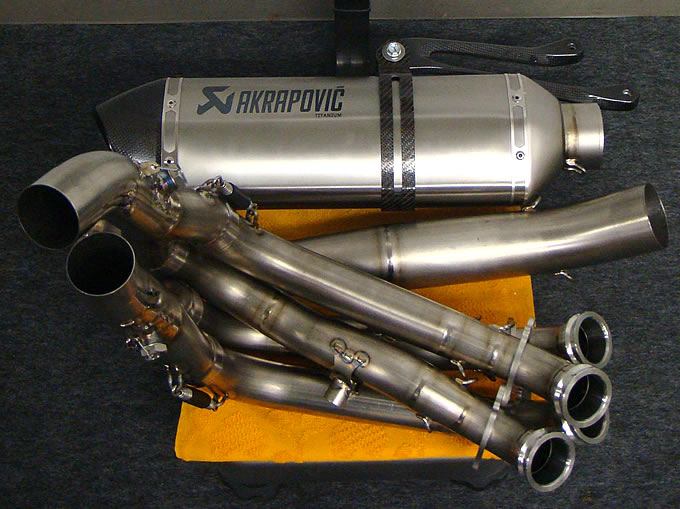 An also lighter Akrapovic racing muffler. Like the CPU these specialized race parts are available on the market. 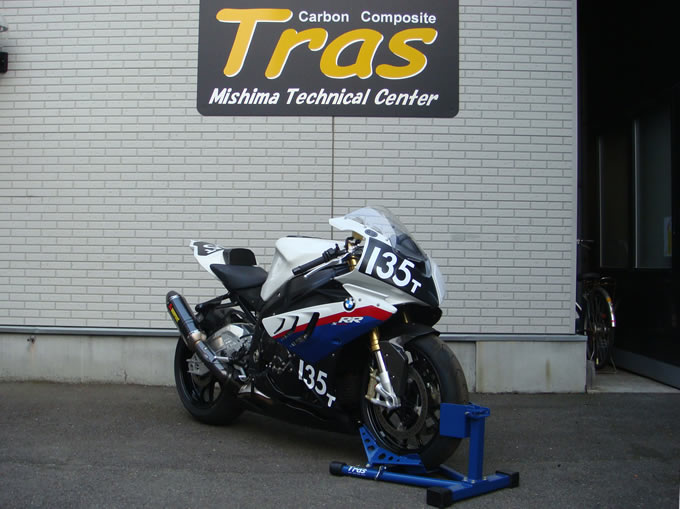 The bike ready for the Suzuka 300km test ride. Normal muffler, and under cowl attached. The 24l tank as well. Attach a light and you could go for normal roads!

The radiator Muto-san ordered from Germany has arrived. But… Where is the mounting case?