Coca-Cola Zero 33rd Suzuka 8hours Endurance Annual Meeting: The #135 Tras & G-Tribe + 8810R team has brilliantly raced the 3rd series of the 2010 QTEL FIM World Endurance Championship. From the standpoint of building the race bike, Nitta-san from Tras has been writing this blog series. In this fourth and last edition, let’s hear from the challenges within the pit on the day of the race, Sunday July 25th 2010.

The S1000RR is packed with BMWs most recent technology and holds sheer power within. This years Suzuka was HOT in many ways!

The first thing we encountered upon our entering Suzuka: The scorching heat. Once Muto, Saito and I finished setting up the pit, we went for some shade and took a sip from our pet bottles. I am not exaggerating; the drink supposed to cool our throats was warmer than our own body temperature! The thought burning in our minds: Is the water temperature in the bike going to be OK?! As I explained in the last blog entry, the engine and the radiator used are standard parts. During our tests air temperature was around 30 degrees. During Suzuka 8tai week the temperature exceeded 37 degrees Celsius! After his test ride Toda called out: “The water temperature is really high! During the test ride it rose 10 degrees!” Of course this caused uproar with the mechanics:

Iwama：“Hirano-san! What was the maximum water temperature the bike can take? ”

Team mechanic Iwama-san is Meister at Motorrad Suzuka. He is asking Hirano-san, who is in charge of After Sales at BMW Motorrad Japan.

Hirano“Correction only kicks in at a hundred-something degrees, so we are totally fine! We can ride with the normal parts! ”

Everyone is satisfied and relieved.

Hirano-san, who works for the motorcycle division at BMW Japan, always gathers maintenance information on the new models quickly and then regularly instructs the dealer mechanics. He actually has incredible experience. At home in Germany BMW organises mechanic world championships (for the 4-wheeled vehicles). Hirano-san has actually won this world championship once! Thanks to the appearance of Hirano-san the mechanics lost their worries and continued their work in an instantaneously improved mood. 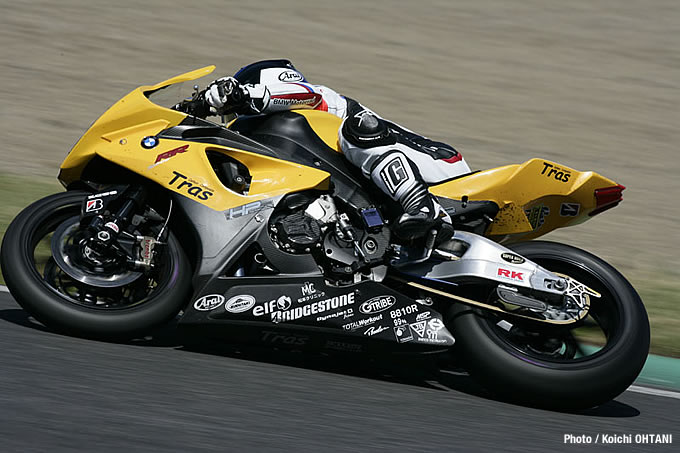 Rider Takashi Toda: To enjoy the motorcycle sport, he runs a pro-shop focussing on suspension centred machine setups. He is the director of G-Tribe. 2010 he is challenging the Japanese Road Race Championship with the S1000RR.

First up: Free practice. Toda-san goes first. We can feel his aura as we see him disappear. But what is this? He does not return… When he finally does he is reporting a machine error. The Meister instructor and the Meister mechanics exclaim: “It’s that thing” and at once start their work. As Toda returns to the track, we can again feel is aura…

Finally: Qualifying starts.
Right before the start: Again trouble! Toda ? ready for a time attack ? cannot start! His aura transforms into anger. But just as the atmosphere seems to turn bad our head of mechanics Nagayasu-san joins Toda-san (G-Tribe). The two have a long race history.’

Nagayasu：“That’s alright! Toda doesn’t lose it over such a thing.”

Toda：“No worries! I am determined to drive off the bad luck this time!” (He smiles.)

To fulfil the dreams and goals of everyone involved he changes his spirit like flicking a switch. That is not an easy thing to do. The machine that had shown a slight problem got rid of the malfunction right with him.

Race day greeted us with a clear blue sky and sweltering heat. On this day I have to start working on the bike in the workshop of Motorrad Suzuka. 8810R (Rider Hayato Takada) likes to do things right. To minimize working time in the pit, he indicates troubles with the stand. It is exactly in these times that I as a crafting professional have to radiate energy. While being stung by horseflies I execute the repairs and return to the pit. From the early morning a sense of accomplishment fulfils me. 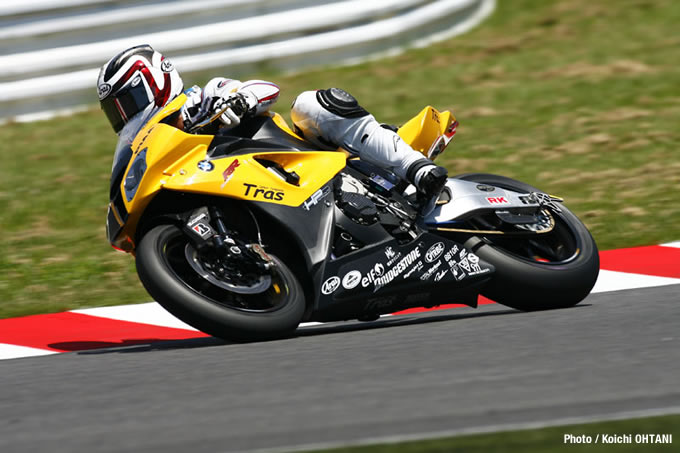 Rider Hayato Takada: His first time riding a BMW is this S1000RR. His handling is unbelievable and his know-how in setting up the bike earned him full trust from the team.

At 11:30 it is finally starting time. 8810R rode a steady race and then the handle changes over to Rider Saito. In the pit I am in charge of the fire extinguisher! This is a remainder from the Motegi race in 2008. Muto-san had joined in as a rider and I took over his duties as a fire fighter. More on that is on his blog. There are also race reports from Muto-san, Toda-san (G-Tribe) and MSP of Saito-san on their respective blogs.

It is typical for a BMW team not to have an overly strong team leader or steep hierarchies, when the riders are on the course or when working in the pit. The oiler in charge is Boxer Sports Club president Takagi-san, responsible for the sign board is Kubota-san from BMW Japan and so on. Everybody loves BMW and thus enjoys doing whichever job needs to be done! The team and the riders are connected through this positive atmosphere.

Completing the planned amount of laps in the race, the checker flag ends the race at 19:30. We are officially ranked 18! 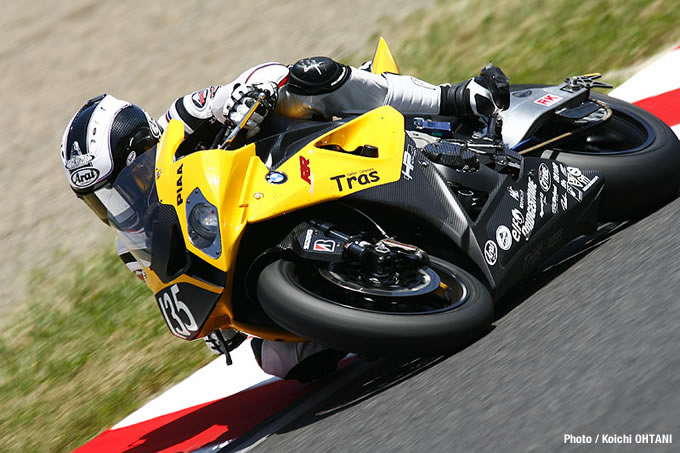 Rider Eiji Saito: As representative of MSP he actively organizes various events. The last time he rode Suzuka 8tai was in 2006. When first asked by team director Muto to ride this year, he considered passing due to his long break from championships.

Traditionally it is now time for the big water battle at the pool behind the pit. Look! Reinert-san is not wet yet! Well unsurprisingly nobody has the courage to shove the Director of BMW Motorrad Japan into the pool. Well… That is when I come into play. From the moment Reinert-san landed in the pool he became the top of the team! And he told me: ‘Next year again!’

That S1000RR was incredible! The vehicle that fought the race, was the exact one I had ridden to Beater in Gotemba. All we changed were the CPU and the Akrapovic race muffler! This is the undeniable truth! That means the S1000RR you are privately riding could enter the Suzuka 8tai!

Thanks to the support of all of you, we were able to produce a great outcome. Thank you very much for supporting us until the end. I am dreaming of a Suzuka 8tai next year, where many S1000RR are taking on the challenge… Next year!! 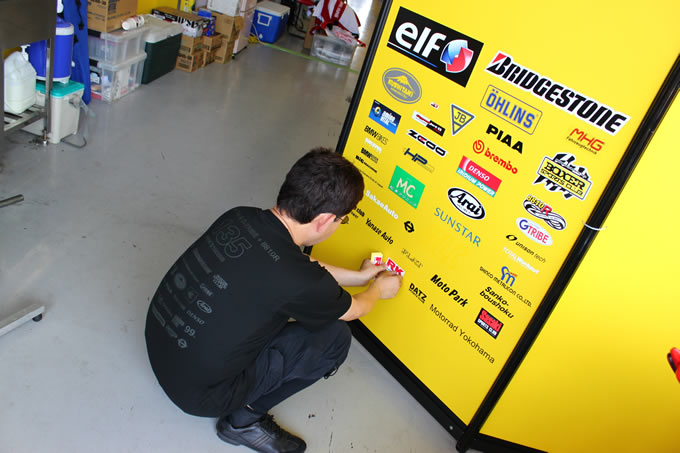 Impression from before the race (Nitta attaching the RK sticker). I am responsible for the pit setup as well as attaching the stickers of our sponsors. 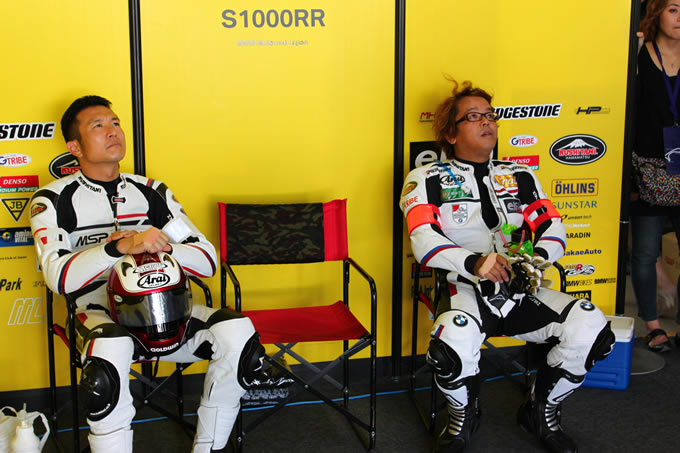 Is our rider Toda ready for the 8tai free practice? Rider Saito is very nervous… (This might be the first time I ever saw him so nervous! By comparison he is very quiet.) 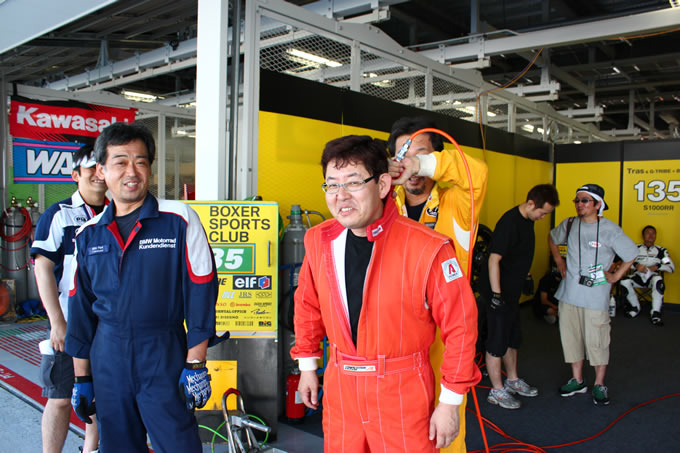 Right! Since that race in 2008 I have the important and responsible role of taking care of the fire extinguisher. The oiler and the ?fire fighter must wear a flame resistant jump suit. It’s hot! I asked the representative of the Boxer Sports Club Takagi-san to cool me down with some air. 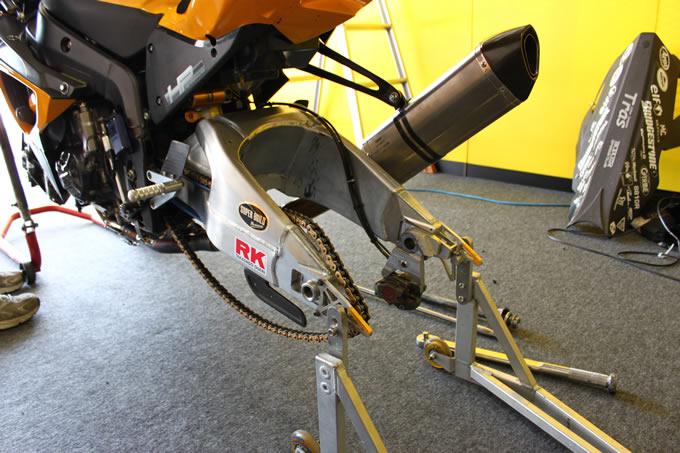 The Superbuild swingarm is to go on sale. It is lighter and has built-in reinforcements. It gives the bike a race like touch and is cool! 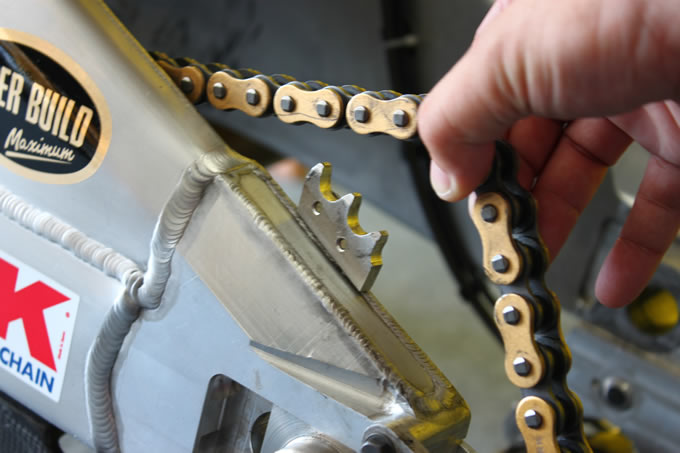 A little innovation by our chief mechanic Nagayasu-san. An unused sprocket transformed into a chain hook for use during the tire change. Nagayasu: “With this changing tires is no problem at all! Hahahaha! ” 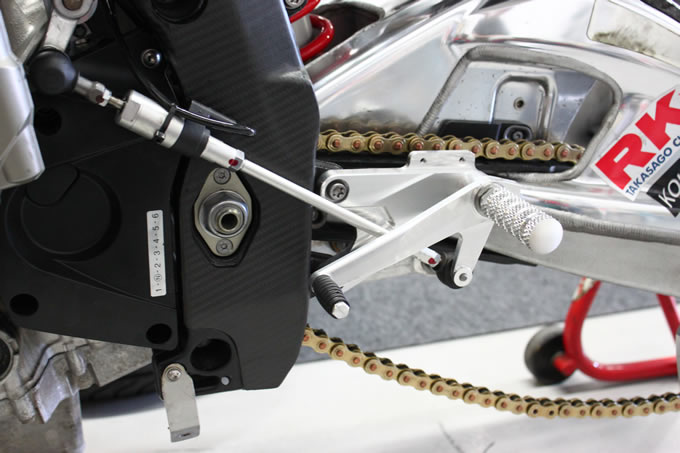 Step built to rider Toda’s needs. It is set to the ideal height. This item is to go on sale at G-Tribe. 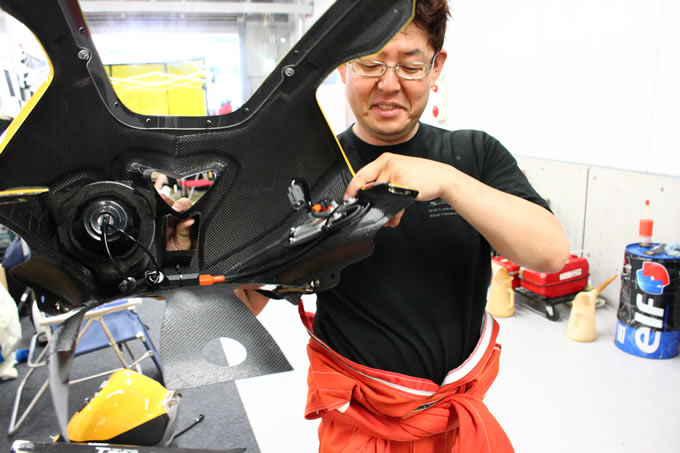 PIAAs headlight is an essential part for the 8tai. This is how the light is mounted. The cowl is beautifully made, even where eyes normally cannot reach. The low weight is incredible! 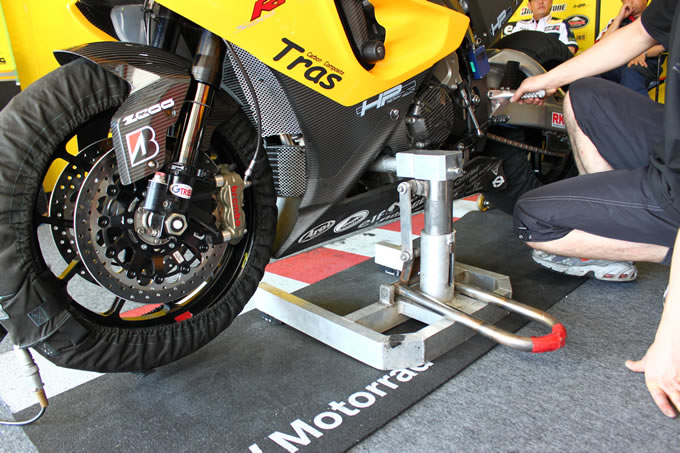 The original stand of a R1100S. On race day we attach used Kushitani knee sliders to the back of the stand, in order to make the disassembly and assembly for the mechanics smoother. 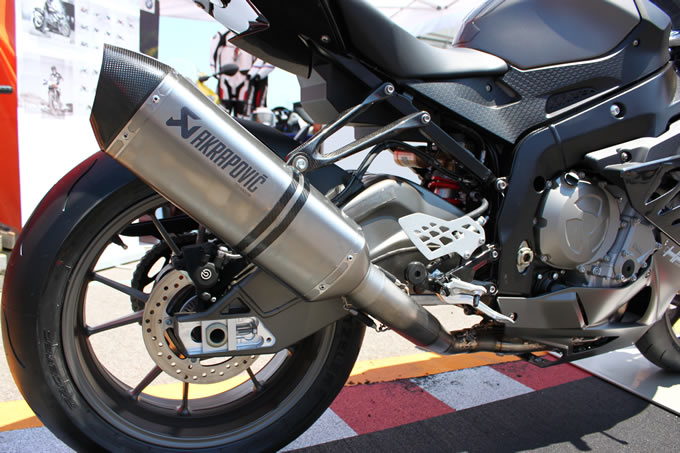 The Akrapovic full exhaust muffler will be sold by BMW dealerships. Once fixed onto the 8tai machine we feel more confident! 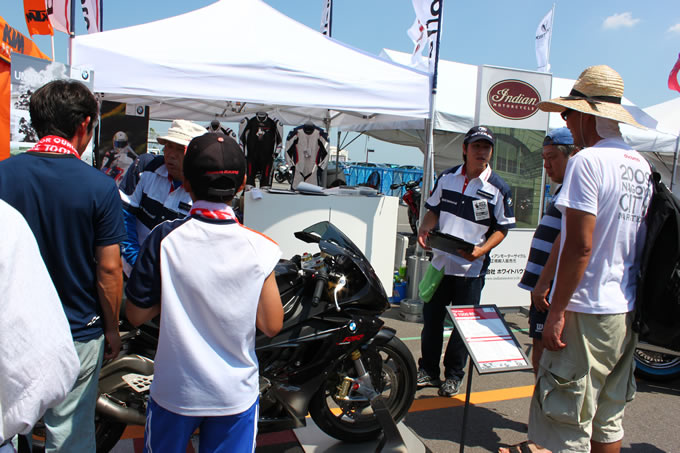 At the BMW Motorrad booth on the event ground the S1000RR is equipped with the muffler. As it is not yet on sale, it attracts attention. It is a racing part and not approved for normal roads. 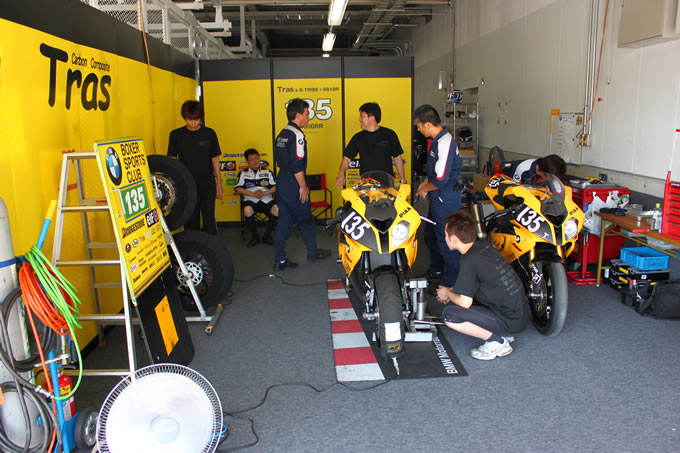 The last checks are done on race day. The mechanics are in a peaceful mood. It’s a cool pit, isn’t it? The one sitting in the back is me! 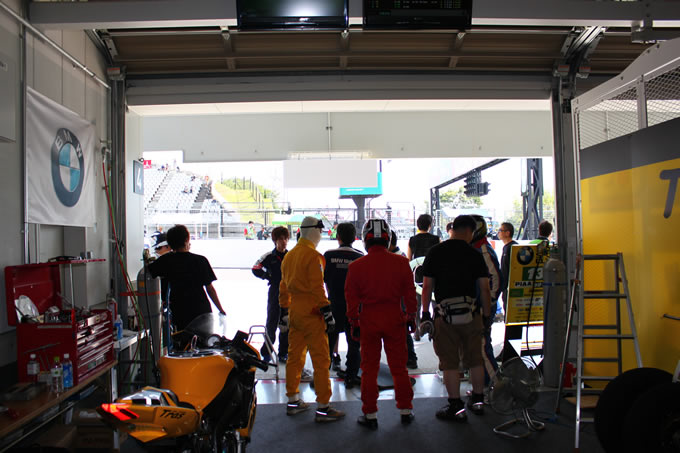 Last process checks in the pit during the free practice. I am the one in the red flame resistant suit. I actually borrowed the helmet from rider Takada. It’s his spare one. 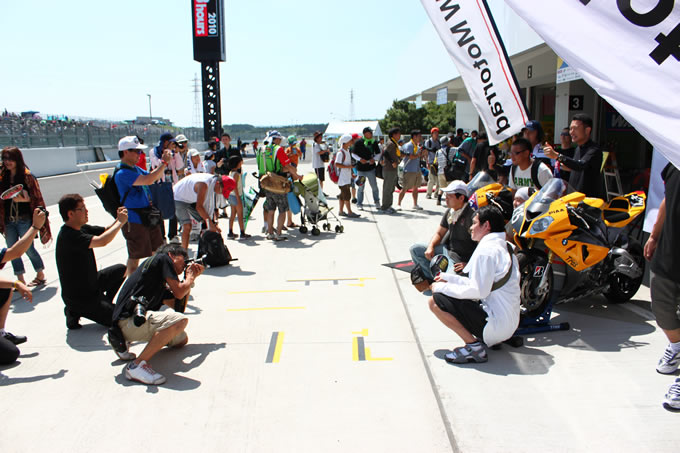 We got a lot of attention during the pit walk! Cool! I got to take a souvenir shot of the moment.

The 8hours endurance road race has started! Our no.1 rider Hayato Takada is on his way! You can see that our bike in Tras Yellow stands out on the track! 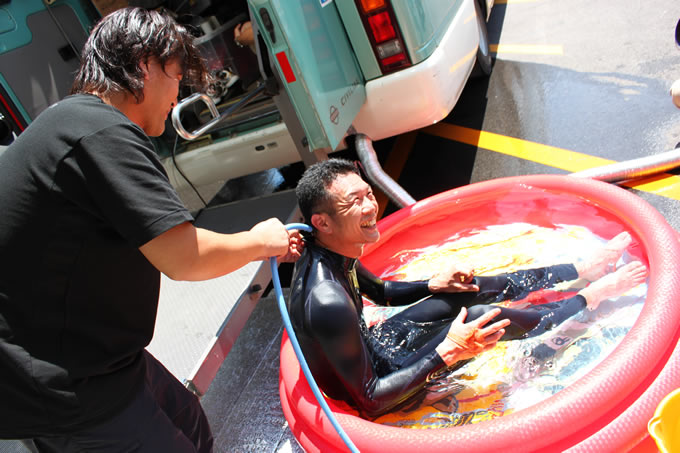 The famous pool behind the 8tai pit! Rider Eiji Saito enjoys the cooling water supplied by Hayato Takada. The pool helps us survive in the heat! The relationship of the riders in the Tras team is great. They manage the stints perfectly. 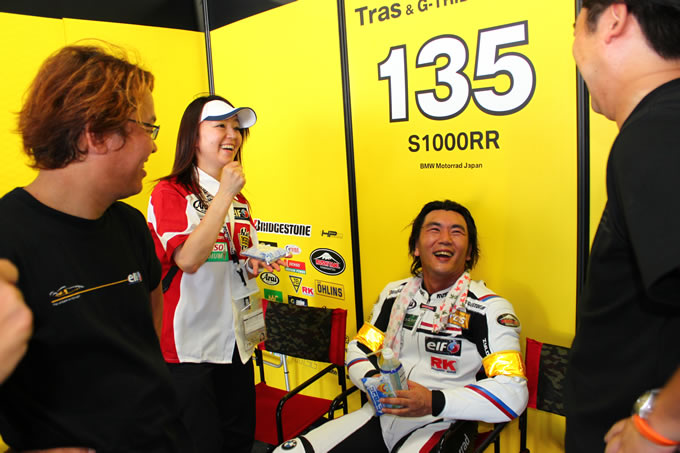 It has been 5 hours since the start. Riders Takada and Toda are smiling as Saito circles the course constantly. Also Takadas helper Kobayashi is smiling. 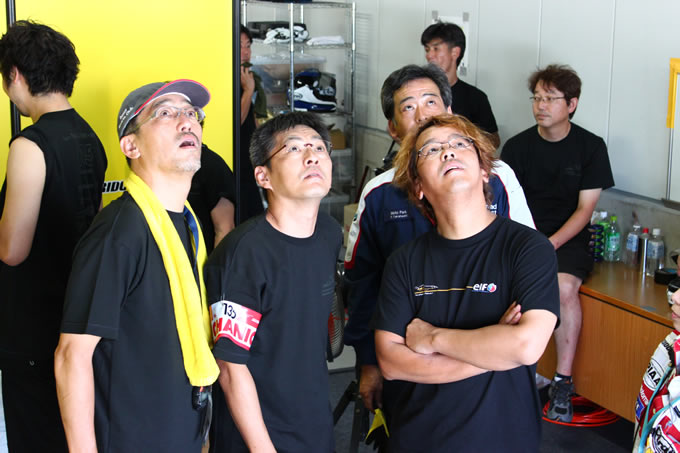 Rider Saito is keeping the same pace as in the qualifying. Muto: “Is he gonna be alright, riding at that pace?” Toda, Nagayasu, Takahashi: “…” Saitos steady riding and his rank winning manoeuvres amazes the team. 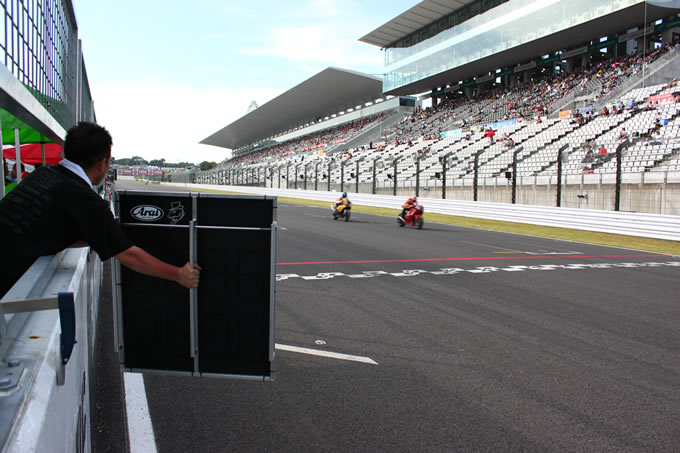 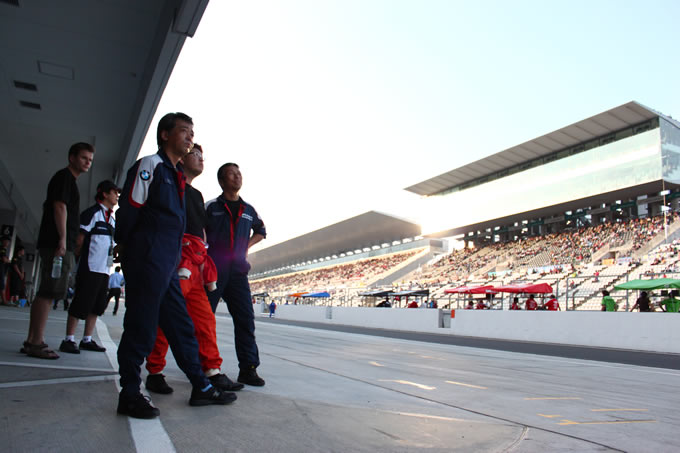 It is before 6PM, the last sun of the day. One and a half hours till goal time. Takahashi-san, Terashima-san and me. Behind us Reinert-san and Kubota-san. All are hoping the riders keep up the good ranking. 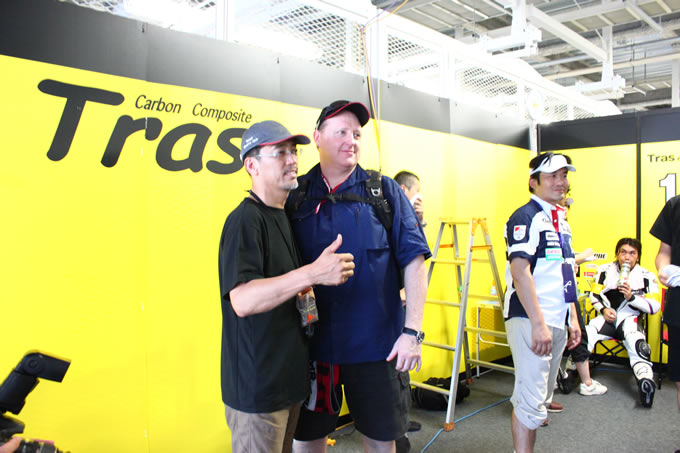 A journalist from Australia takes a picture with team director Muto. But as we have not completed the race, Muto is not smiling just yet. 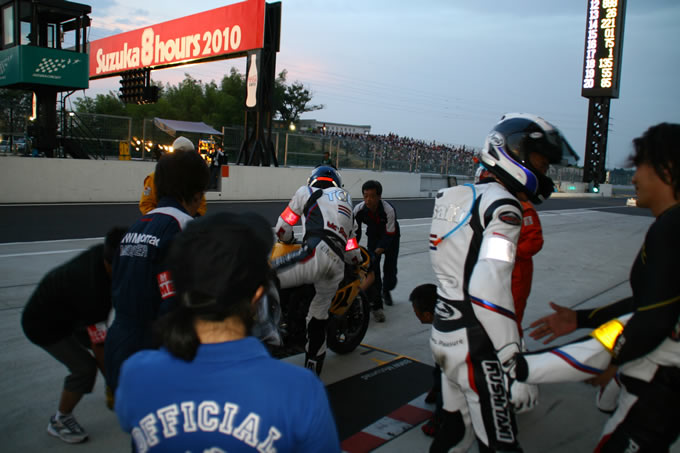 Finally! The finale! Time for our last rider Toda to take the handle. By the way the reflecting armband indicates his number. Rider no.1 is red, 2 is yellow and 3 is white. 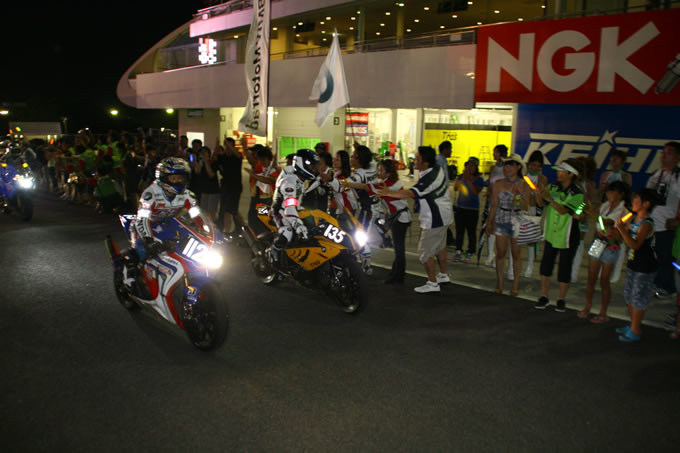 201 laps! We completed the race without big problems! Toda-san answers the high touch of the team. Tras Yellow looks great at night, right? 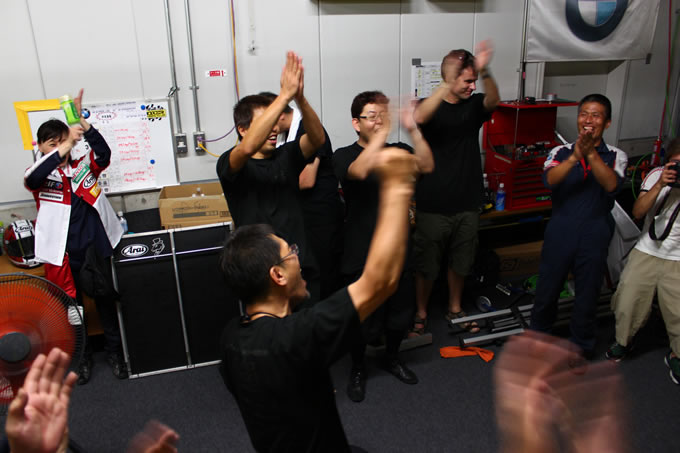 Visible joy in the pit. Muto-san calls out: “Everyone, thank you for this great achievement!!!” 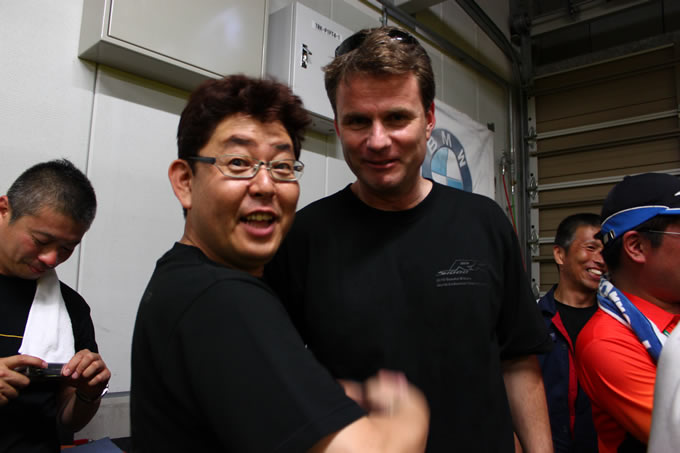 Shaking Reinert-sans hand, he tells me “Again next Year!” That is my happy face, when I hear those words! 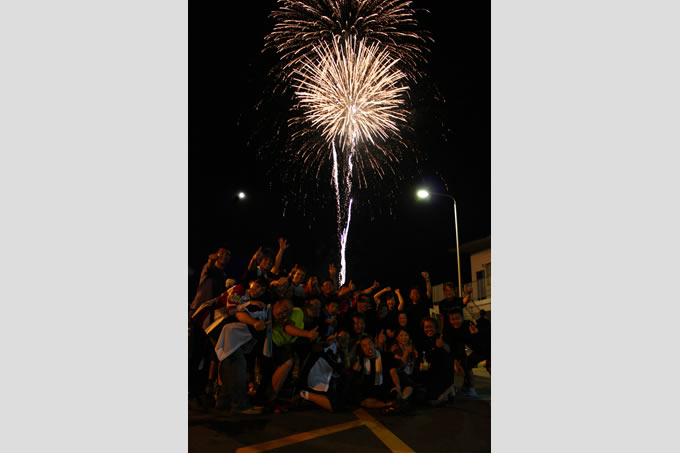 Souvenir shots of the 8tai seasonal fireworks. Everybody is joyous. During the fireworks the water battle is going on. Everyone is wet. Of course Reinert-san too! 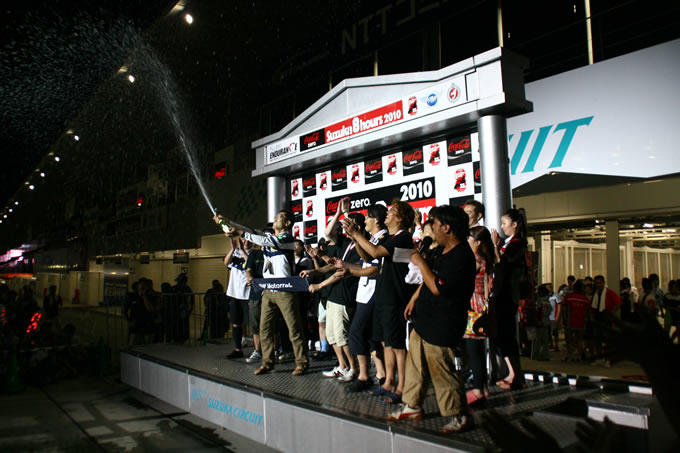 Ceremony for the teams, that completed the race. The team is up on stage! “We finished the 8hours with a normal engine and acquired position 18! Yess!” That’s Muto-san emphasizing on our standard engine. 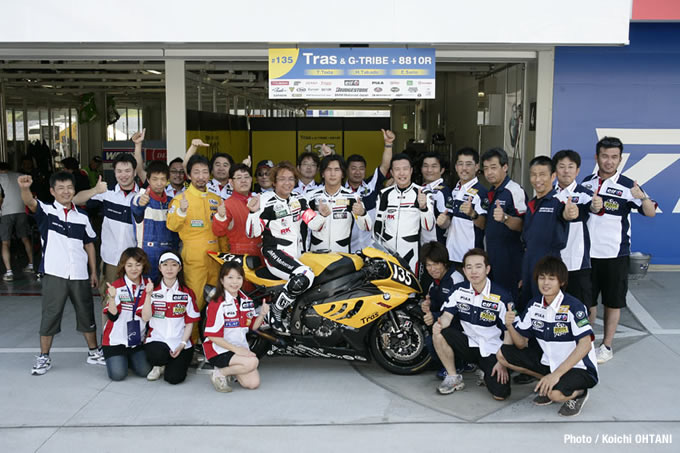 Before the race the team gathered for a souvenir shot. Can you see the motivation in their expression? Especially to be mentioned: Uchino-san from the BMW Motorrad Dealership Backpackers in Hokkaido. From Gunma prefecture Motopark President Takahashi and Terashima-san from Yanase Auto. From Motorrad Yokohama in Kanagawa prefecture a first time: Shop Manager Sasaki. And from right next door: Iwama-san from Motorrad Suzuka. Of course everyone took on their participation and travel costs themselves. Everyone thank you very much for your motivation!